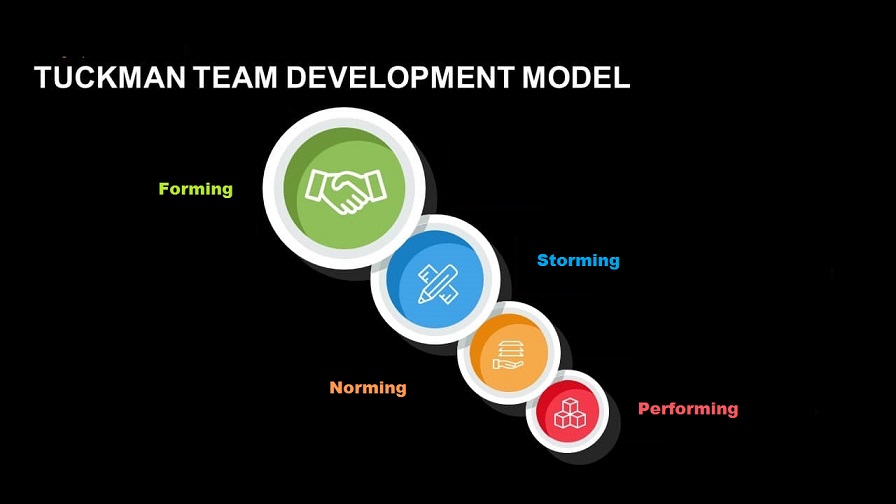 COVID-19 pandemic has locked the humans in their homes. Businesses are shut, and economies are shrinking. But don’t let the dread of quarantine annihilate your productive minds and turn you onto a state of depression. Instead, use this time to sharpen your skills when the world is busy rejuvenating or recovering from the deadly virus. Rather than just sitting idle at homes playing video games or just relaxing, refer to the article that you have bookmarked due to dearth of time. Take online courses or study about theories or methodologies which can enhance your business functioning or productivity. One such business methodology is Tuckman’s theory of group development, which educates the managers, entrepreneurs, and businesses about ways of building a team. The theory concentrates on the way a team tackles a task, starting from the formation of a team, through the completion of an assignment or project.

What does Tuckman’s theory explain?

No business or organization could ever succeed without a team. The team formulates a concrete structure for an organization. Building a team isn’t specific to just adding strangers. But for an effective team, people working should coordinate with others and must be able to work together to contribute collectively to the team’s outcomes. But this doesn’t happen automatically. Team members go through various recognizable stages from being complete strangers to a united group of professionals working to achieve common goals. And Tuckman’s theory of team development explains gives a detailed overview of all such recognizable steps for the formulation of a successful team.

Developed by Bruce Tuckman in 1965, it’s a well-known team development theory and one of the most influential groups formation models. Tuckman’s theory educates the folks about the stages of development a team goes through at work. The theory even applies to a group of friends, organizations, volunteer groups, and everywhere where you interact with a group. The theory is relevant to oversee team-building challenges as the theory pertains to completing any task undertaken by a team.

Apparently, until now, in our article, we have discussed the importance of team as an entity, but not the individuals working in it. It’s the same as discussing a car’s color, features without considering its engine and specs. Often, we see and interact with the external characteristics of the team. But what forms and keep the team functioning is its internal characteristics. In a team, its internal characteristics are the peers working in the team. Building a team needs coordination, communication, hardworking, teamwork. But it doesn’t come automatically. As a business professional, you would surely have experienced when you are assigned to a project you are complete strangers. Firstly, you sit around and stare at each other unknowingly where to start. As time passes, you know each other and want to except, you divide tasks and duties and knows how to coordinate with each other. Through this process, you start working as a team rather than a group of strangers. Bruce Tuckman accounted for the process of team formation in his theory and precisely defined the process in five simpler steps. By understanding the theory, you can quickly build an effective team.

What are the Stages of Team Development?

In the year 1965, in his article “Developmental Sequence in small groups,” Bruce Tuckman” segmented the process of team development in four memorable phases, which include forming, storming, norming, and performing. Later he added the fifth phase is adjourning.

How to Use Tuckman Theory of Group Development

Tuckman’s theory of team development empowers the management to understand where they are at – what steps they need to follow to build a powerful group, and what steps could help the team to perform better. This development theory could be incorporated into the management repeatedly due to changing goals, leadership, or team structure. Learn more about team formulation here in our blog Effective Employee Management Strategies.

How to Create Brainstorming Session

What is an Innovation Management Syst...